Cleaning up Fuel Emissions on Motorcycles 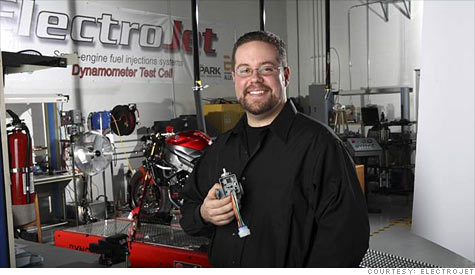 DETROIT (CNNMoney.com) — When Americans debate the impact of fuel emissions on the environment, they usually talk about cars and trucks. But what about smaller vehicles like motorcycles, scooters, lawnmowers and ATVs?

Riding a lawn tractor for just an hour spits out as much pollution you’d get from driving a car for hundreds of miles, according to former Ford Motor Co. engineer Kyle Schwulst.

“It’s something that people don’t realize, but the traditional automobile has come a long way in becoming much cleaner than smaller engines,” Schwulst says. “So much attention has been paid to automotive engines, but the smaller ones are much more harmful to the environment.”

For the non-gearheads out there: Fuel injection systems regulate the mix of fuel emissions and air that goes into internal combustion engines. They make engines more efficient and less polluting. For that reason, fuel injectors replaced carburetors in most trucks and automobiles by the end of the 1980s.

But most small-engine vehicles still use carburetors. That’s why they emit so much pollution.

In 2003, Schwulst launched ElectroJet in Brighton, Mich., a distant suburb of Detroit. Now, seven years later, he is going global.

In June, Schwulst signed a partnership agreement with Magneti Marelli, a multibillion-dollar Italian manufacturer of high-tech auto components. The two companies have teamed up to develop an electronic fuel-injection system for the world’s two largest motorcycle markets: India and China. Together, those nations build more than 40 million new motorcycles — equivalent to 75% of the global total — each year.

New rules limiting motorcycle fuel emissions took effect in China this July. In India, similar regulations are expected to go into effect next year. Both policies closely resemble restrictions that are currently in place throughout much of Europe.