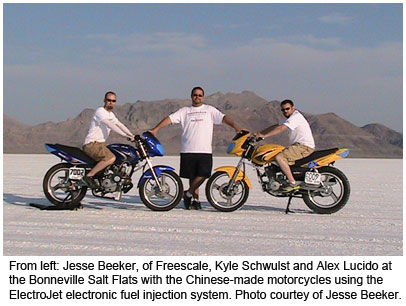 Kyle Schwulst ’02, owner and CEO of ElectroJet and a 2002 graduate of Kettering University, and his team undertook setting speed records to prove that motorcycles “can be clean, green and still have high performance,” said Schwulst. They were able to take their product to the Bonneville Speedway with the help of two sponsors, Freescale Semiconductor and Standard Motor Products.

Bonneville Speedway is an area of the Bonneville Salt Flats near Wendover, Utah, that is marked out for motor sports. It is particularly noted as the venue for numerous land speed records, typically set during Speed Week.

ElectroJet designs and manufactures low-cost electronic engine controls for applications including motorcycles, lawn mowers, and generators. The firm based in Brighton, Mich., and consists of primarily Kettering alumni and co-op students.

They took Chinese-made Moto-chu motorcycles with 150cc engines to Bonneville, competed in the 175cc engine displacement class, and still managed to earn speed records. “We had a top speed of 63 mph,” said Schwulst.

“These motorcycles are some of the cleanest of their kind, and setting speed records proves that environmental friendliness does not have to negate vehicle performance,” said Schwulst. In testing, the ElectroJet system has been shown to reduce pollution by about 90 percent from the carbureted versions of the same motorcycles.

“Our products definitely improved the performance of the vehicles,” he said. “The ElectroJet system makes these small engines more efficient. That means the engines use less fuel but run better in just about all aspects of mechanical performance.”

“These records were set using exhaust catalysts and ElectroJet EFI in purely stock vehicle trim,” explained Schwulst. “You could literally purchase one of these motorcycles from a dealership showroom in China, and with all the pollution reduction technology on the vehicle, I believe it is fair to say that these motorcycles were by far the least polluting vehicles out on the salt,” he said, of the Bonneville competition.